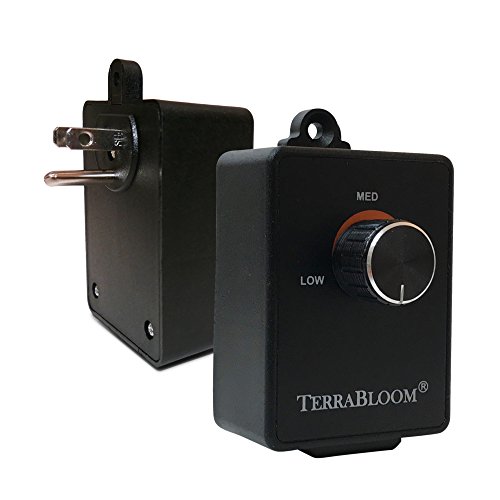 Does your fan has built-in speed settings? If yes, then DON'T buy this product, it won't work with your fan. If your fan doesn't have speed settings, then this product IS for you and will allow you to control the speed of your fan. TerraBloom Variable Fan Speed Controller allows you to control the speed of fans built with a Brushed Motor, which don't come with built in speed settings. This fan motor speed controller will help you to reduce the noise from your intake booster fans, duct fans, exhaust fans, centrifugal fans, etc. Depending on the type of the motor used, this speed controller will be effective in decreasing the max output CFM of your fan by 20-50%. Reduced airflow equals less noise and more privacy in your grow room. Your fan's adjustable range could be determined by rotating the knob of TerraBloom Variable Speed Controller from the HIGH setting towards LOW setting until you start hearing fan's motor hum. Do not decrease the operating speed of your fan past the "hum" point. TerraBloom Variable Fan Speed Controller is not suitable for Non-Brushed motor fans, as well as fans with built-in speed controllers. All units are covered by 1 Year Manufacturers Warranty that can be claimed by contacting us.

- SPEED CONTROLLER FOR BOOSTER FANS: Designed and Tested to Work with TerraBloom Booster Fans. This Speed Controller will allow you to slow down your 6", 8" or 10" booster fans by 25-40% percent from Max Speed. 4" Booster Fans are very quiet even at Max Speed, this controller will only let you slow it down by only 10-15% due to low powered nature of its motor.
- CHECK FOR COMPATIBILITY: This Fan Speed Controller won't work with Box Fans or Any Fans which have a built-in speed controller or speed settings. Mixing two speed controllers on one fan causes compatibility issues. Use with fans not manufactured by TerraBloom or appliances other than fans is subject to compatibility, flawless performance not guaranteed in such applications.
- NOTE ON "HUM" SOUND: If you slow down your fan too much, it'll start making "humming" noise, which signals that the motor is not getting enough power. Each Fan has a speed range that it can operate in, typically the more powerful the motor, the larger the speed range it will have until it starts to "hum". Slowly turn the knob the Highest point to gauge the range of your fan's motor, its lowest safe speed is right before motor starts to "hum".
- KEY STATS: Current Capacity: 3.5A, Voltage Capacity: 120V, Rated for up to: 350W. Durable 3-Pole Grounded Plug Construction, No Extra Wires To Deal With. This speed controller's "High", "Med", "Low" marks are for reference purpose only. Some Fans have very little adjustability range due to their motors' constrains, such units can only be adjusted within "High" zone of the controller and will "hum" on Medium and Low settings
- WARRANTY: We provide 1 year warranty on these variable fan speed controllers. You can exchange or return the item for any reason within 30 days from purchase date